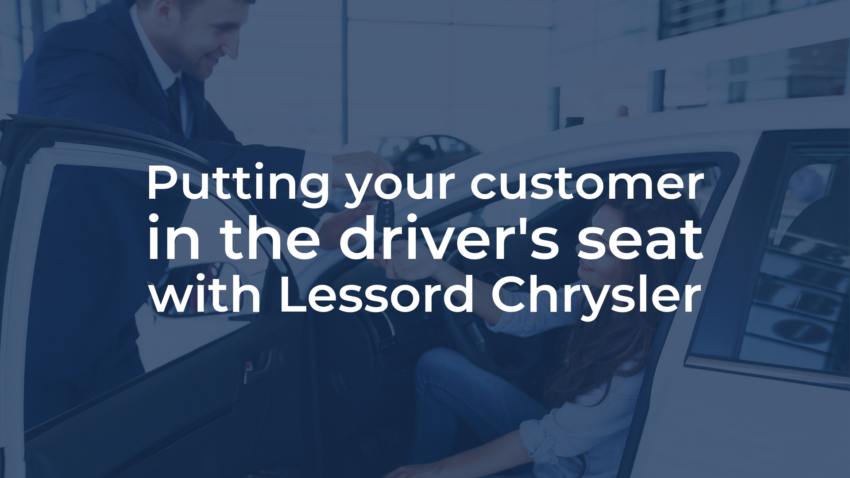 Lessord Chrysler has found the key to success through its relationship with Impel – putting its customers in the driver’s seat. Over the past year, Lessord Chrysler adopted the Impel Mobile Capture App for its dealership. Caitlin Garrett, Digital Marketing Manager, and her team are already seeing the massive benefits.

Lessord Chrysler just moved locations and has increased its used inventory exponentially from just 1 car to over 30. Knowing that they have so many more vehicles to showcase, the Impel Mobile Capture App is the perfect tool to get them out of “old ages” of traditional merchandising and marketing.

“Lessord Chrysler took its traditional merchandising and marketing to the next level with a way more informative digital approach and the numbers are telling — our website traffic is up 63% since using we partnered with Impel and we’ve seen consistent growth on our site since we began using the Impel Mobile Capture App.” explained Caitlin Garrett.

The Impel Mobile Capture App has empowered Lessord Chrysler to give their customers all of the information that they need to know before they set foot into the dealership thanks to the high quality images and videos. The 360-degree software and the power it unlocks gives Lessord Chrysler’s customers the insight they need to know before deciding if a vehicle is right for them.
Because of that insight, Lessord Chrysler has found that customers show up further along in the typical car buying process than they did before they had partnered with Impel. That means an improved customer experience which not only makes happy customers, but it improves the in-dealership conversations and the speed at which a car is purchased. All of this translates to faster turn rates!

Beyond the benefits that Lessord Chrysler’s customers now get with the Impel Mobile Capture App, the general sales manager, Melissa is able to use the detailed intelligence reports to make informed business decisions that benefit the entire dealership.

This website uses cookies to improve your experience while you navigate through the website. Out of these, the cookies that are categorized as necessary are stored on your browser as they are essential for the working of basic functionalities of the website. We also use third-party cookies that help us analyze and understand how you use this website. These cookies will be stored in your browser only with your consent. You also have the option to opt-out of these cookies. But opting out of some of these cookies may affect your browsing experience.
Necessary Always Enabled
Necessary cookies are absolutely essential for the website to function properly. These cookies ensure basic functionalities and security features of the website, anonymously.
Functional
Functional cookies help to perform certain functionalities like sharing the content of the website on social media platforms, collect feedbacks, and other third-party features.
Performance
Performance cookies are used to understand and analyze the key performance indexes of the website which helps in delivering a better user experience for the visitors.
Analytics
Analytical cookies are used to understand how visitors interact with the website. These cookies help provide information on metrics the number of visitors, bounce rate, traffic source, etc.
Advertisement
Advertisement cookies are used to provide visitors with relevant ads and marketing campaigns. These cookies track visitors across websites and collect information to provide customized ads.
Others
Other uncategorized cookies are those that are being analyzed and have not been classified into a category as yet.
SAVE & ACCEPT